With 200 years tradition in high quality ham & Iberian sausages, this familiar company is located in Corteconcepción: a small and authentic village in Sierra de Aracena, motor promoting of the Iberian ham. The quality of the sausage has nothing more to prove because it is part of the values of the Huelva region

The story of a great family success 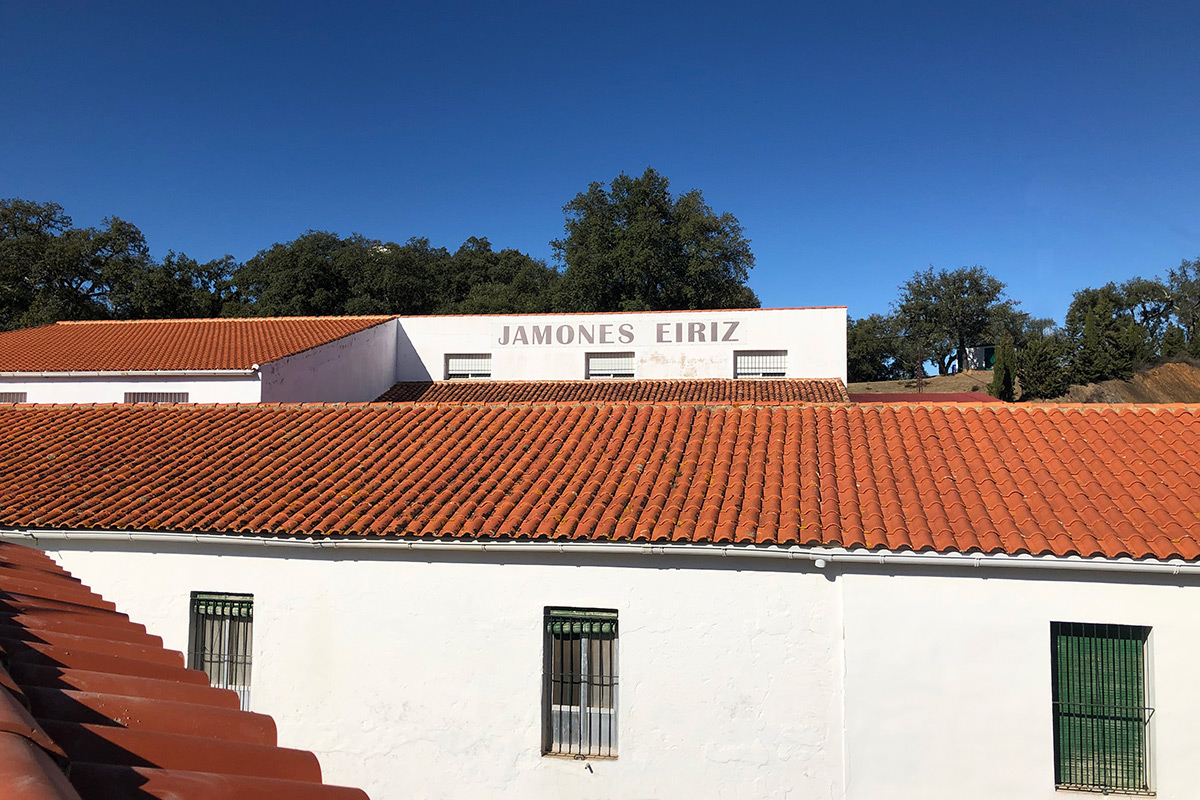 Domingo Eíriz and his brothers, at the head of Jamones Eíriz, represent the fourth generation of a family with 200 years of experience in the acorn-fed Iberian ham sector. They inherited this passion for iberian ham from their great-great-grandfather, who came from Galicia to work in the Riotinto mines. Once the necessary funds were raised, he bought his first farm and created his own business, seeing a future in Iberian pig farming in Corteconcepción, the village where a large part of his descendants, including Domingo, now live.
Today, Jamones Eíriz is a company that sells locally in its Corteconcepción factory, but also all over the world.

A family business with international prestige

Why are Eíriz hams so good?
In the finca (farm) of the Eíriz family, the Iberian pig is raised in freedom. It is an animal that runs freely in the Andalusian nature and has the capacity to eat up to 12 kilos of acorns of oak trees per day, combined with grass, roots, mushrooms and olives. A typical Mediterranean diet!
The way the company moves forward, driven by Domingo and Gerardo, is marked by its desire to continuously improve and improve, always giving priority to the quality of the work and the products. 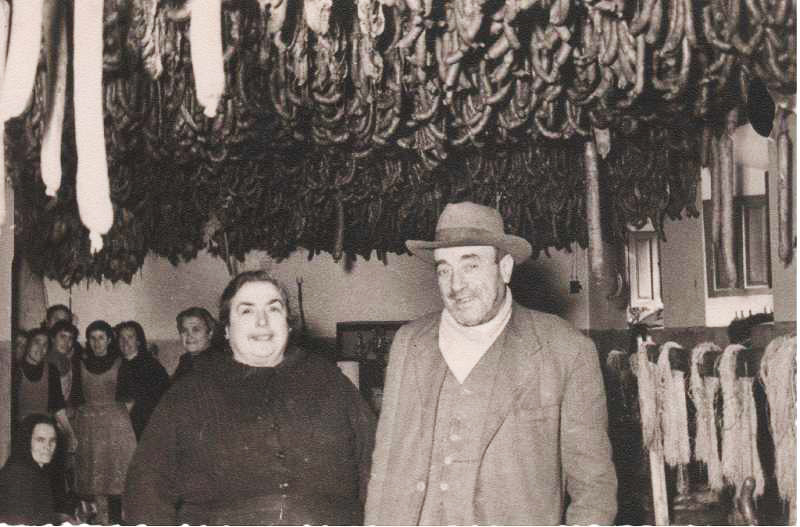 Each ham has been cared for by expert hands for a delicate and precise work before being left to mature in their cellars, real natural dryers.

Gastronomic tours and contests in the route of Jabugo

While retaining the family know-how but combining traditional artisan techniques with more modern manufacturing processes, the Jamones Eíriz company maintains a high-level quality standard that has earned it high distinctions in the most prestigious gastronomic competitions in the world.
Thus, Jamones Eíriz obtained at IFFA 2013 in Frankfurt – an international meeting considered the "most important meat contest in the world" – 4 gold medals (for its acorn-fed Iberian ham, its natural Iberian acorn loin sausage caña de lomo and the canned one, its Iberian acorn lomito) and a silver one (for its cereal-fed cebo de campo ham). In the next edition in 2016, it won 6 gold medals and a gold cup. The 6 Eíriz products entered in the competition that year won a prize. The quality of its products has also been recognized at the Great Taste Award in London receiving a Gold Star in 2010 and the “Three Gold Stars” award in 2011 and most recently in 2020, 7 stars in total. The Eíriz Iberian caña de lomo obtained three stars, the highest rating. Two stars were awarded to its Iberian lomito and its 100% acorn-fed Iberian ham PDO Jabugo, respectively. 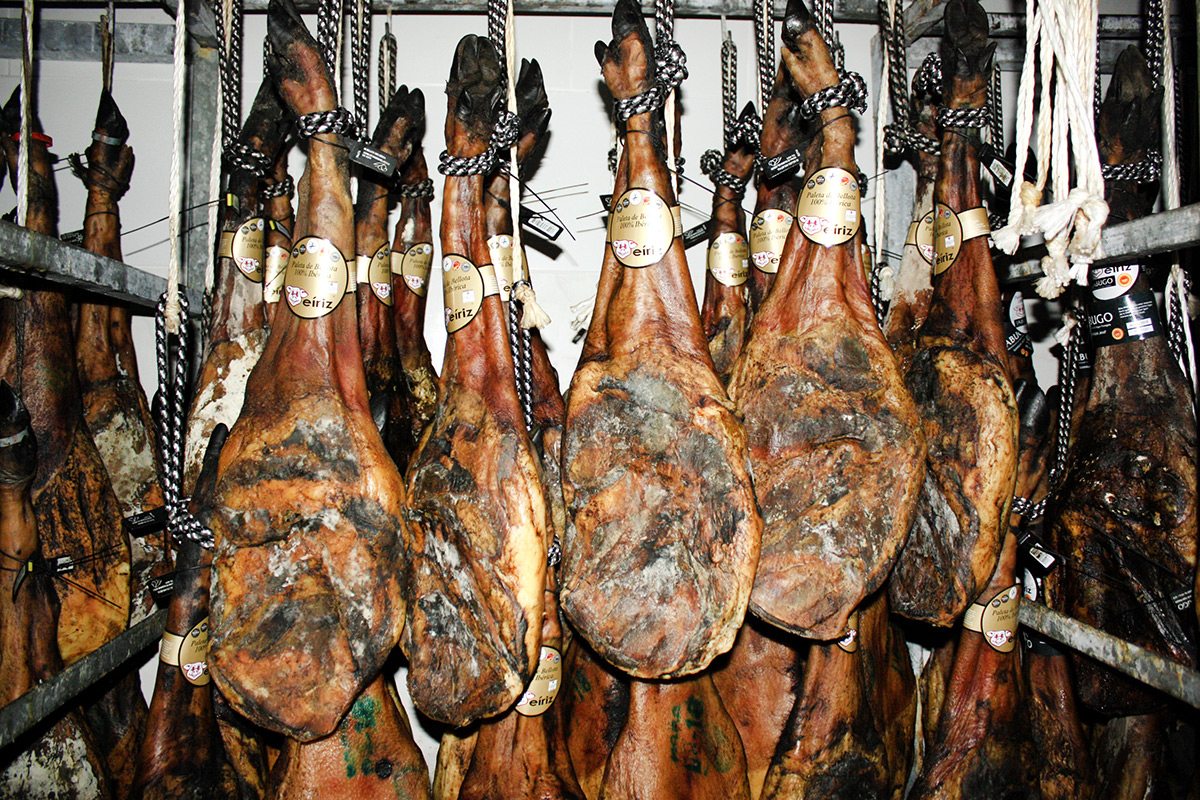 Through the different national and international gastronomic meetings, their products are valued, promoted and sold, but it’s also an opportunity to explain to consumers who love Iberian sausages, cured meats and hams, the know-how, rigor and professionalism that make all the difference. And when the time comes for the tasting, there's no doubt about it. 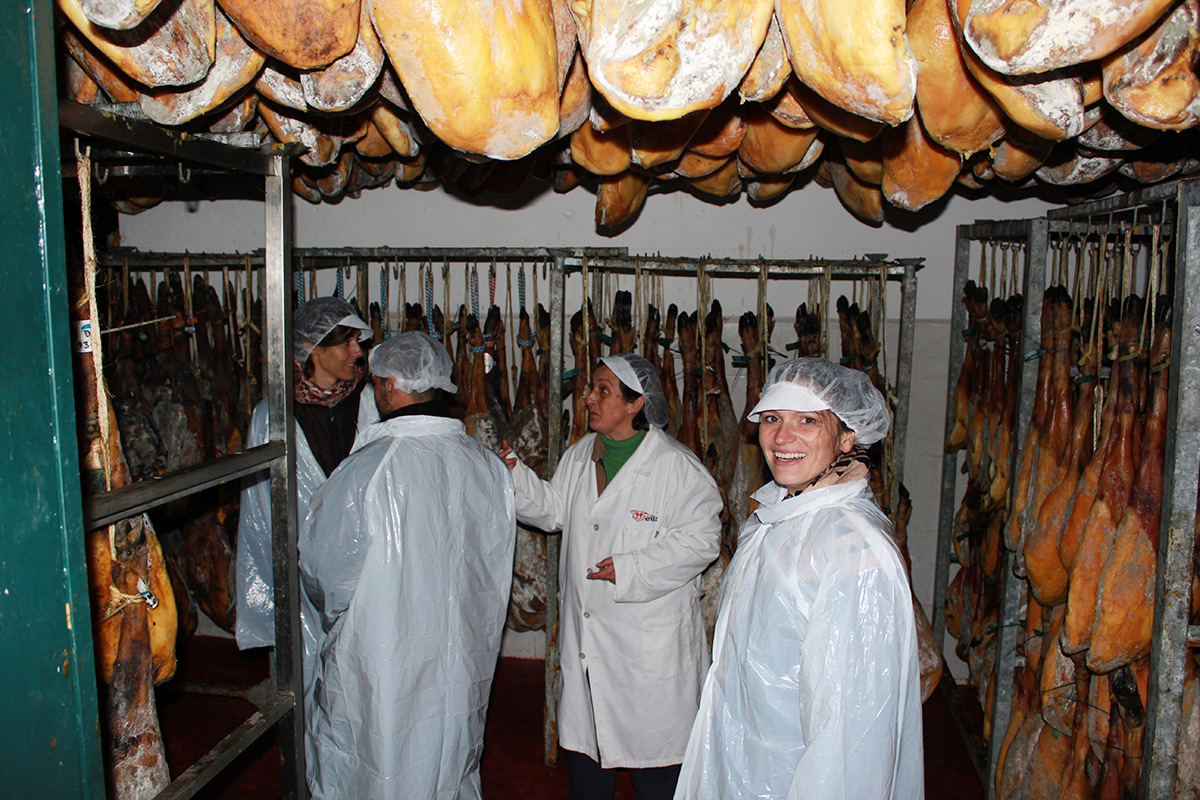 Although the fastest way to taste the whole range of Eíriz products is by ordering online on our Tapas-Shop.com, within the «Ruta del Jabugo», tourism project, it is possible to discover the finca and learn more about the manufacturing process of Eíriz Iberian hams and sausages. Visits to the farm, the factory and product tastings are organized; privileged moments that allow you to feel the passion that animates the members of the Eíriz family and company who are involved in this Iberian adventure. We attend it religiously every year, without any weariness! 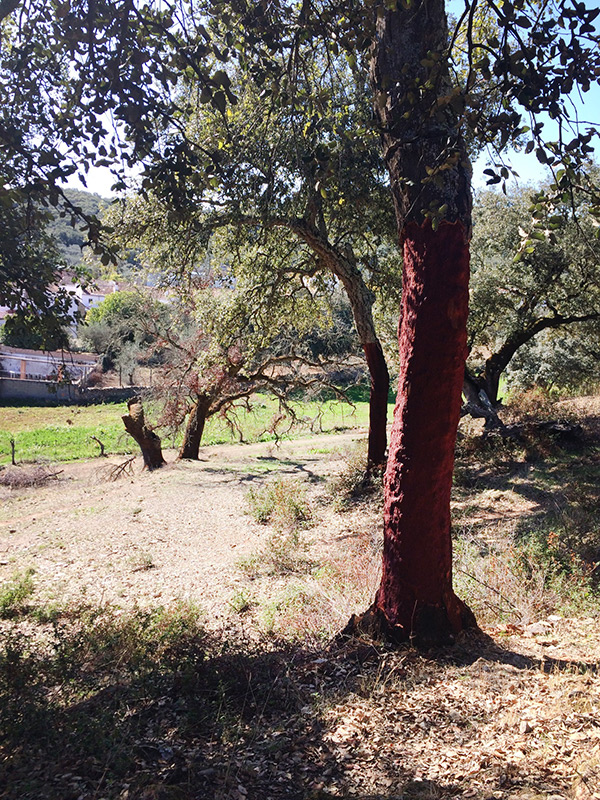 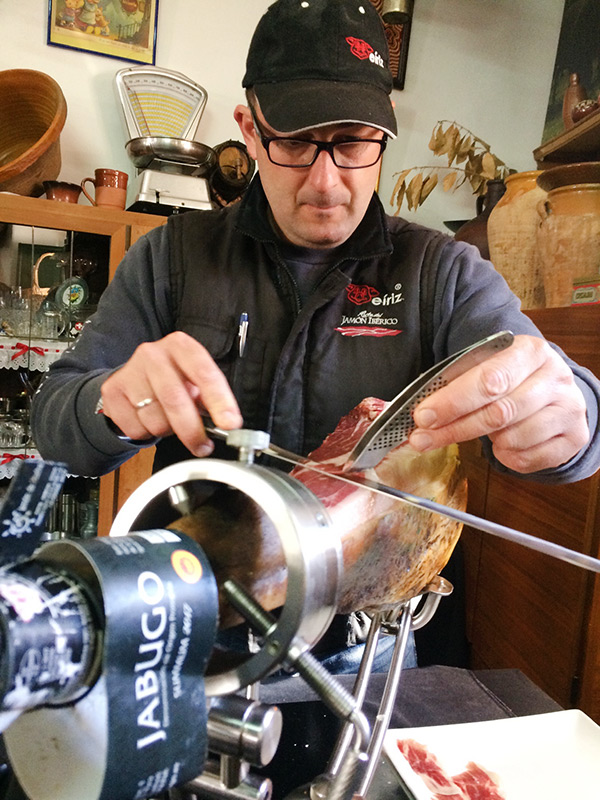 Since its first edition in 2012, the Eíriz company is also in charge of sponsoring the National Contest of Ham Cutters, the only competition in Spain in which the cut is made on pieces of acorn-fed ham with a protected designation of origin DO Jabugo; Eíriz bellota hams, of course. .

The village of Corteconcepción belongs to the Sierra de Aracena and Picos de Aroche Natural Park, one of the most important protected areas in Andalusia and which occupies the entire north of the province with its pastures of oaks (dehesa).
For this company with artisan production, far from being very polluting, based on drying in natural cellars and in symbiosis with its close environment considered as a biosphere reserve by UNESCO, it seemed logical to turn to an even more sustainable and responsible production. In 2015, it obtained a certification issued by the AENOR (Spanish Association for Standardization and Certification), calculating the CO2 emissions generated per piece of acorn-fed Iberian ham.
An initiative that highlights the desire of this Jabugo company to further reduce its carbon footprint. 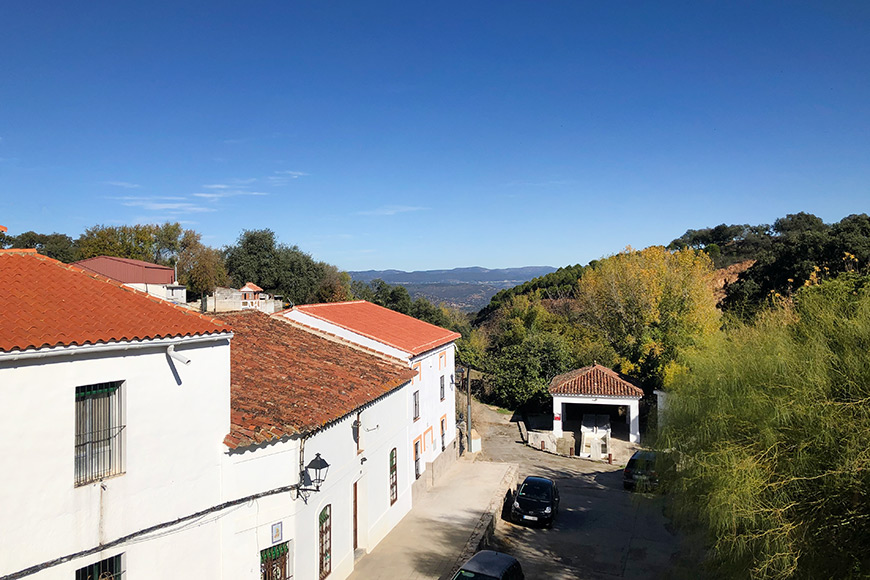 Jamones Eíriz is one of the oldest (the second or third) Iberian ham companies in the entire Sierra de Huelva; the oldest in Corteconcepción. Domingo and his family love what they do and the passion for their work is reflected in every slice of ham tasted.

€30.00
(1)
100% Iberian breed loin, black label. Iberian acorn loin is made from a special cut from the pig. Before being stuffed into its casing, the meat is seasoned. This product, approximately 50cm long, is eaten in thin...

€25.00
(5)
Iberian Lomito of prey, stuffed into natural casings, tied by hand. They are sold by 3 to a weight of about 1 kilo. The house EIRIZ produces lomito unique in Jabugo area. Especially dressing and recipe has been...

€15.00
(1)
Natural-cased Iberian chorizo is made with Iberian pork. It is an essential product among Spanish cured meats, handmade here by Eíriz.

€17.00
(3)
Iberian acorn ham. Black label DO. Slices of ham from Jabugo. Aged in cellars in the town of Corteconcepción for at least 36 months.

€16.00
Iberian acorn ham on the bone. Slices of ham from Jabugo. Aged in cellars in the town of Corteconcepción for at least 36 months.

€10.00
(1)
Around 100g of Iberian acorn tenderloin. From a whole cut of 20-25 cm, cured for approximately 3 months. The tenderloin is a cut that is appreciated for the quality of the meat, which is low in fat and particularly...

€15.00
(1)
Iberian morcón is made with Iberian acorn-fed pork in a similar way to chorizo. Little known outside Spain and eaten mainly during the Christmas and New Year holidays, it looks like a fat chorizo.

€200.00
(3)
Iberian cereal-fed ham, from Jabugo. Made from 50% Iberian pigs with a mixed diet based on acorns, herbs and supplements (cereal). Green label.

€440.00
Boneless 100% Iberian acorn ham DO Jabugo Cured in cellars for at least 3 years, this producer's hams have all the characteristic excellence of the name Jabugo.

€430.00
(1)
Iberian Bellota ham fully boned. Cured in cellars for at least three years, the hams from this producer have all the features of Excellence Jabugo Appellation.

€9.50
(1)
Packet of 100g of Iberian acorn loin sausage. Made from the pig's loin (about 50 to 60cm) which is dried for about three months. The Eiriz family produces a loin sausage whose high quality is recognised in the Jabugo...
Showing 1-15 of 15 item(s)