Where to eat acorn-fed ham, cured meats and...

Where to eat in the Sierra de Aracena and Jabugo

Feast of the slaughter in Linares de la Sierra

The gastronomic festival of Cumbres Mayores

One of the keys to a successful cooking recipe is the selection of its ingredients. By choosing quality raw materials, the goal is halfway accomplished. And if one of its ingredients comes from the Iberian pig, success is guaranteed!

When it comes to marry the Iberian ham, There is no lack of pretenders. 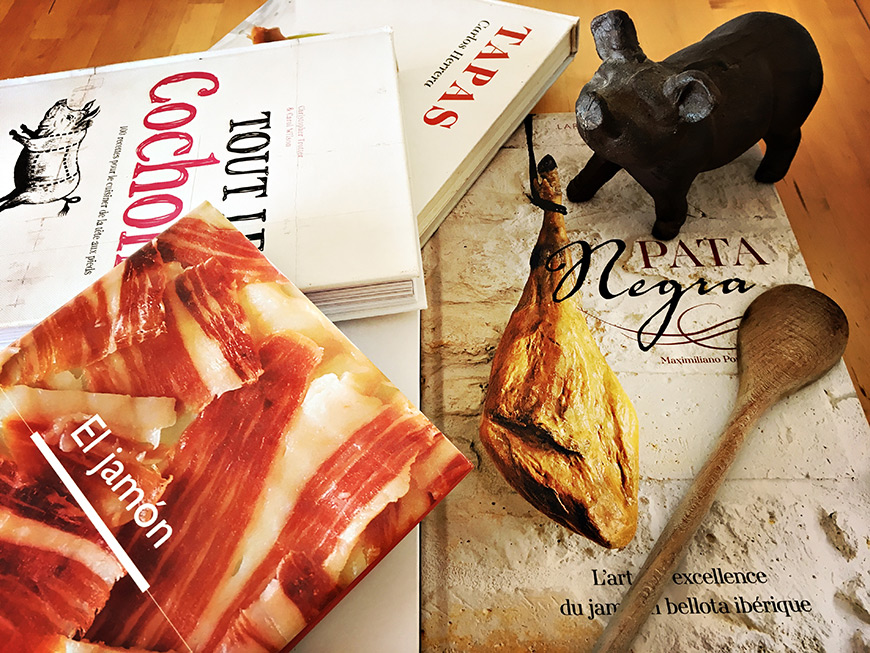 Iberian ham can be used in many recipes such as cold soups. There are many examples but we are bound to evoke the traditional salmorejo. This famous and delicious Andalusian tomato soup is eaten cold with small pieces of ham and hard-boiled egg. This Cordoban specialty should not be confused with its cousin the gazpacho soup which is much lighter.
Other cold soups that are particularly popular in summer include frozen melon soup, a very refreshing starter that is served with thinly sliced ​​Iberian ham. Another cold starter, a carpaccio with a Spanish accent, based on caña de lomo and mozzarella: a totally Mediterranean recipe made with thin slices of lomo ibérico and mozzarella di Bufala. When summer fades, it’s the time for comforting soups… An autumnal butternut squash soup and its Iberian-flavored whipped cream should help to overcome a possible post-summer blues. Beyond its unique flavor, a bit of Iberico ham will bring a hint of salt to a creamy mushroom soup.

From the picking to the plate

With fall comes, wild mushroom hunting season begins. Whatever the variety you have in your basket (ceps, chanterelles, girolles, etc.), you can add diced Iberian ham to your sliced and sautéed mushrooms.

In the Sierra de Aracena, the home of the Iberian pig that Tapas Shop loves, grows an endemic species, the gurumelo (amanita ponderosa). These are the first mushrooms of the year to grow in quantity. They are obviously on the menu of restaurants in the villages of the region and they are most often eaten in revueltos (scrambled eggs) with jamón of course.
Different factors (altitude, climate, soil, vegetation) make the area one of the richest in variety of mushroom species in Spain. From the first fall rains, the josefitas are quick to grow.Then, among the edible species, follow the tentullos (Boletus Aereus), the gallipiernas (Macrolepiota Procera) or the much appreciated and sought after tanas (Amanita Cesarea), also known as Caesar's mushrooms. We can trust Luis Miguel López of the Arrieros restaurant in Linares de la Sierra to show us the best way to eat them. 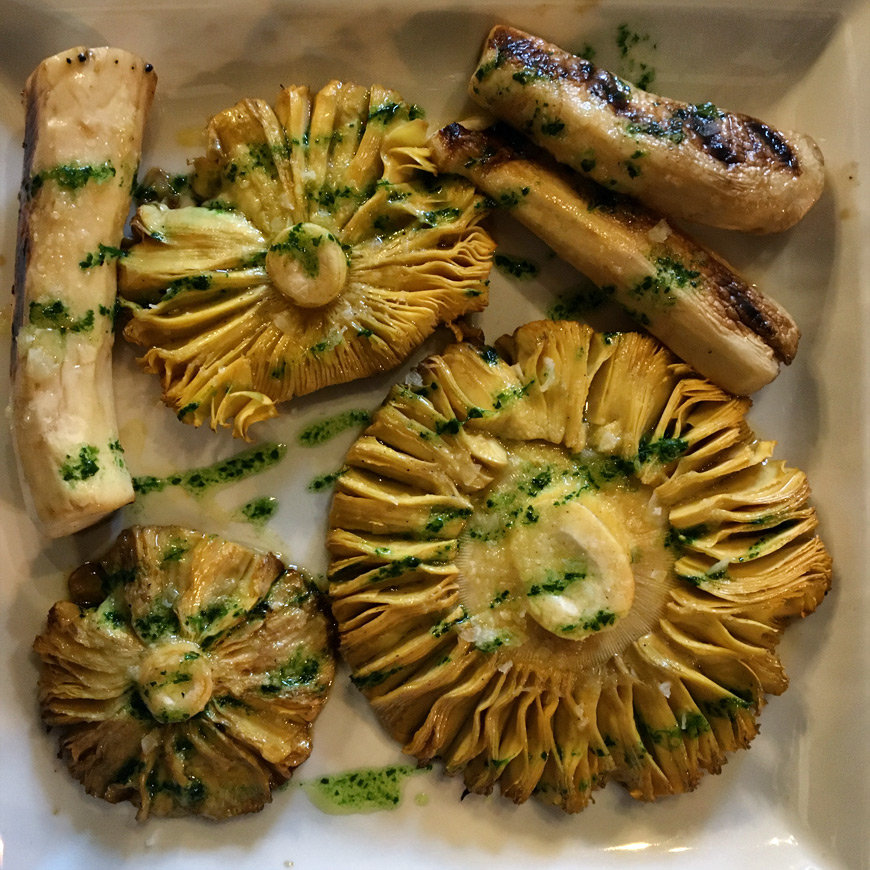 When the first frosts of winter arrive, it is the ideal season to prepare dishes of simmered legumes (chickpeas, beans, lentils, etc.). At this time of the year in France, cassoulet or petit salé aux lentilles (stewed Salted pork with lentils in broth) are very popular. These complete, healthy and nutritious dishes are an excellent way to fill up on protein. The Iberian Peninsula doesn’t lack winter dishes that simmer for hours, such as the unmissable puchero, the ingredients of which could vary from province to province. In Seville, the first time, we were surprised to see the variety of pork fat and bacon prepared by the butcher to make a puchero stew. In Spain too, the fava beans are one of the classic winter dishes, they can be eaten with ham but also with Iberian morcón.

For the cold and beautiful winter evenings, especially in the mountains: high-class version of the raclette with a variety of cheeses, wonderful potatoes and the best pata negra cured ham! Back from skiing, in a chalet, sitting in front of a fireplace... For the initiated. 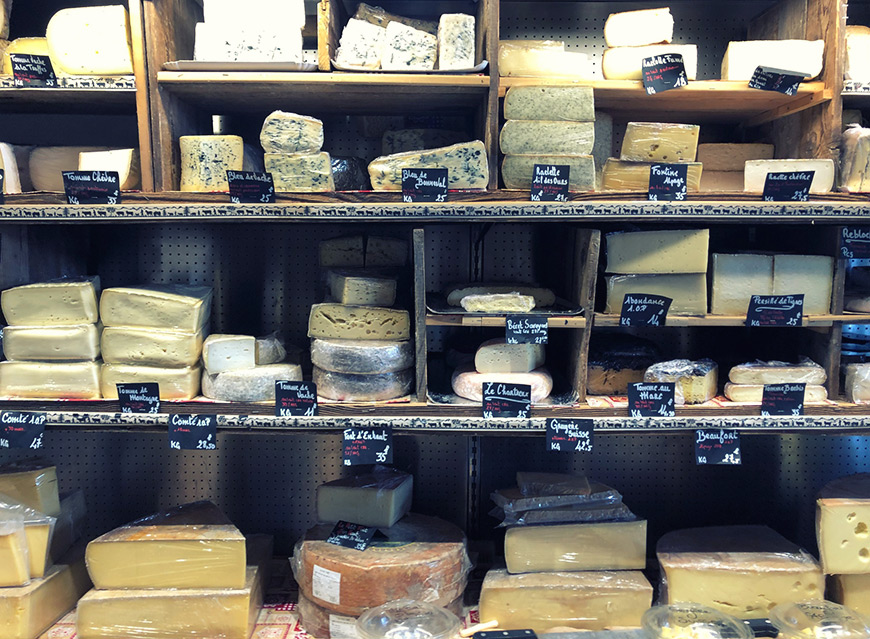 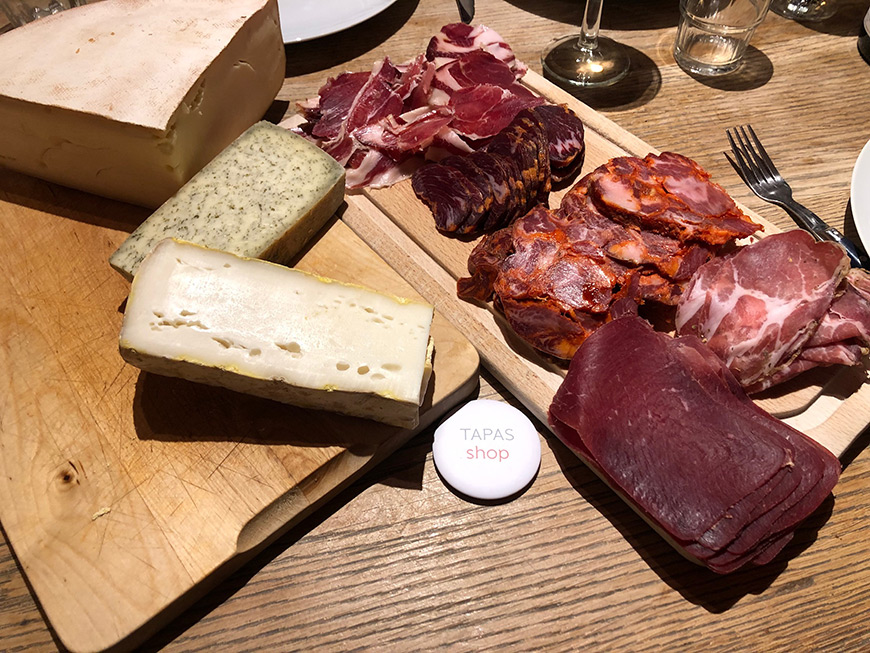 If, to your dismay, you have just finished your whole leg of Iberian ham, do not panic! Before making a new online ordering on Tapas Shop ;-), you must take advantage of this shoulder or leg of ham and cook the bone. It will let your soup or stew have its own edge of flavor. Why not make a good garbure (a traditional dish of the province of Bearn in France) or make a dish based on rice. You can't go wrong with a risotto with a pata negra bone broth.

Between surf and turf

It’s the marriage between two universes in our plates. On one side, food like fish, seafood and on the other, things that grow from the ground, meat and cold meats. When the taste of the land and the fresh sea taste meet, the flavors multiply. 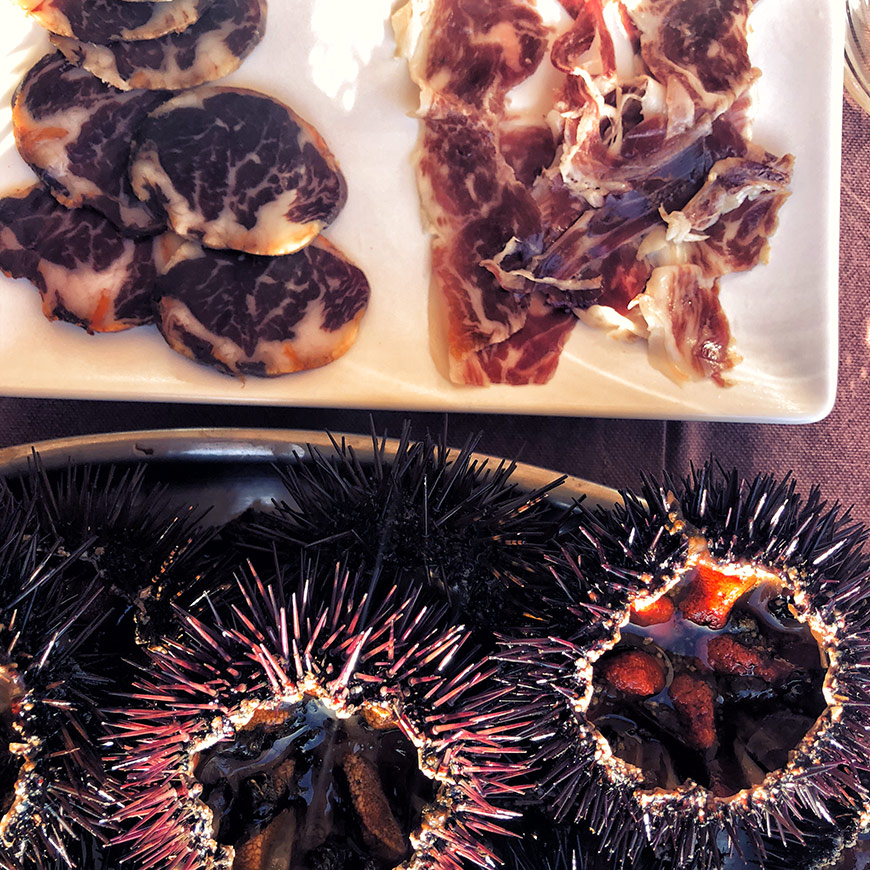 The combinations of the jewels of both land and sea abound. One of the most famous and popular dishes – typical of Spanish cuisine – combining products from the land with those from the sea, is none other than the paella!
You can stuff squids, according to your taste, with chorizo ​​or diced Iberian ham. A simple and delicious way of cooking clams is to pan-fry them with garlic, fresh parsley, small pieces of Iberico jamón, not forgetting to deglaze with Jerez wine (Sherry wine of worldwide renown has always been a true ally for a Iberian cured meat tasting). For a more spicy option: pan-fried clams with chorizo. Cook a fish in the oven (such as sea bass, sole or turbot for example) “iberically larded”, i.e. placing thin slices of Iberian ham between the fish fillets.
Another delicacy is to enjoy the mix of flavors of the sea urchins and of a well-cured Iberian shoulder ham.
In Andalusia, in the province of Huelva (where the Jabugo Denomination of Origin is located), a crustacean is known for its taste and quality: the “gamba de Huelva” (a particular prawn). Consider cooking it with ham for a super tasty experience! In 2019 in Aracena, we discovered a family restaurant, where the chef, Lola Alcaide, prepared a delicious dish with Iberico ham, prawns from Huelva and cep mushrooms!

Finally, to end with these original combinations Sea/Land, here is an elegant dish that's perfect for a special occasion: pan-fried scallops and jamón de bellota.

Fruits for a mix of sweet and salty

The harvest season for figs is long enough to permit testing recipes with this fruit and the Iberian pork: whether roasted in the oven with rosemary sprigs and olive oil, to accompany an Iberian presa (delicious pork meat) or a fig salad with feta cheese and thin slices of jamón from Los Pedroches. 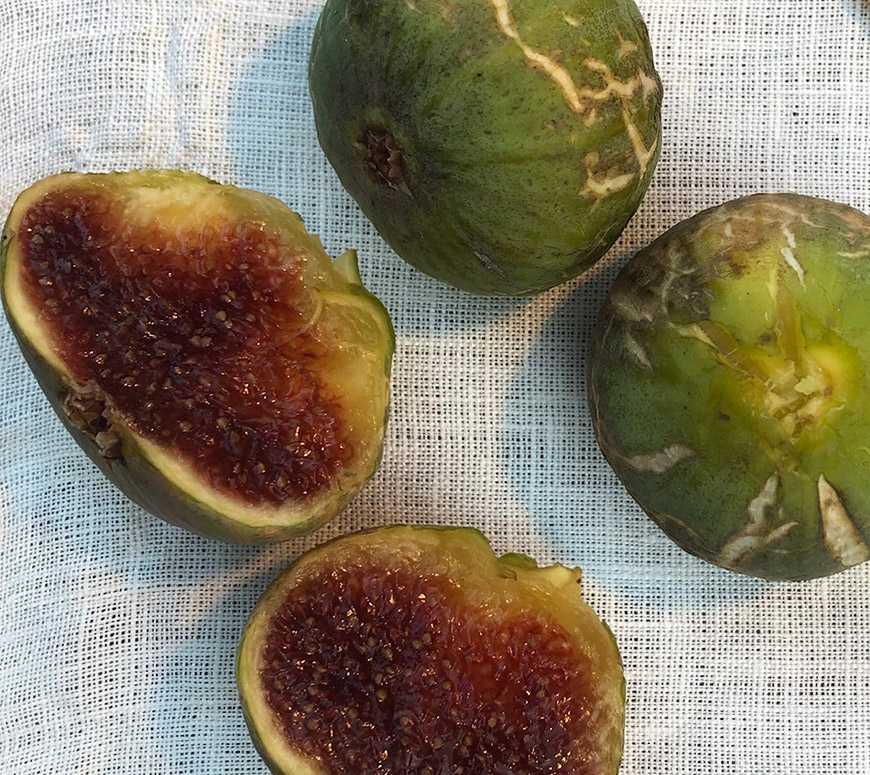 Some fruit combine with some cheeses more than others. It’s pretty common to see quince jelly (membrillo) on a perfect cheese plate. On a charcuterie board with iberian cured meats, it’s interesting to taste quince jelly and chorizo. The latter can also be served with slices of mango, for an original pre-dinner snack. The chorizo goes well with a sweet touch. 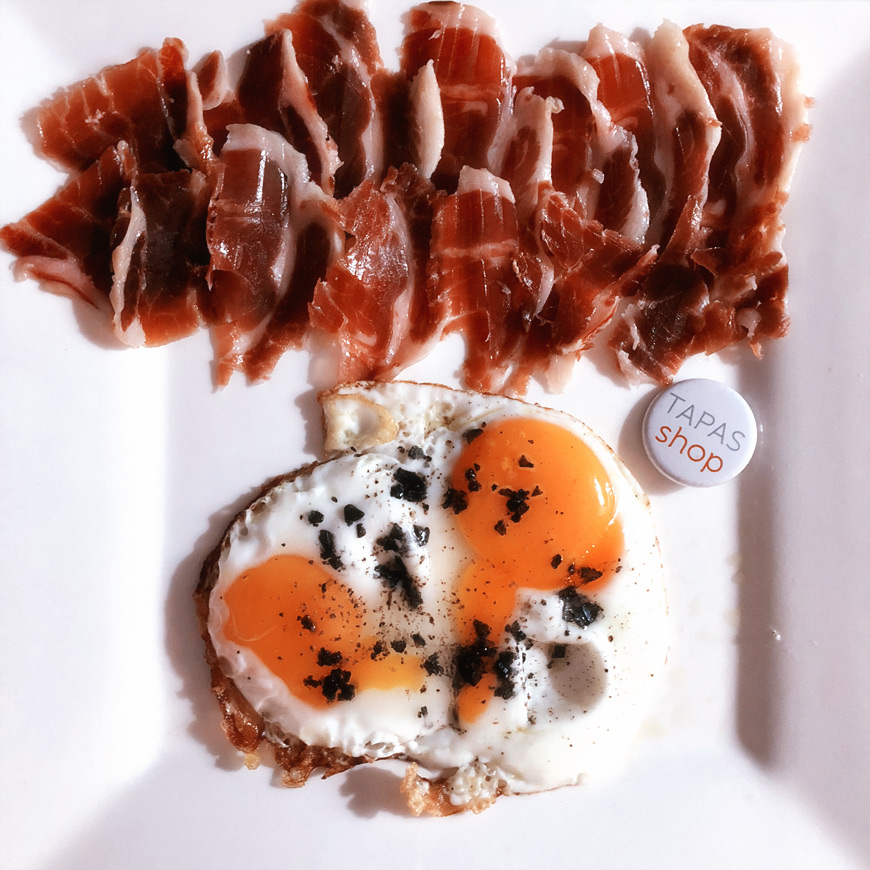 To put it simply, “Everything is good with pata negra!”

With the Iberian pork as the protagonist, many culinary combinations, traditional or new, are possible.
Out of ideas? It is not forbidden to recreate some great classics of gastronomy, or of the Spanish food, quite the contrary! Nothing better than seasonal products to stimulate everyone's gastronomic creativity. All means are good to satisfy your palate throughout the year. 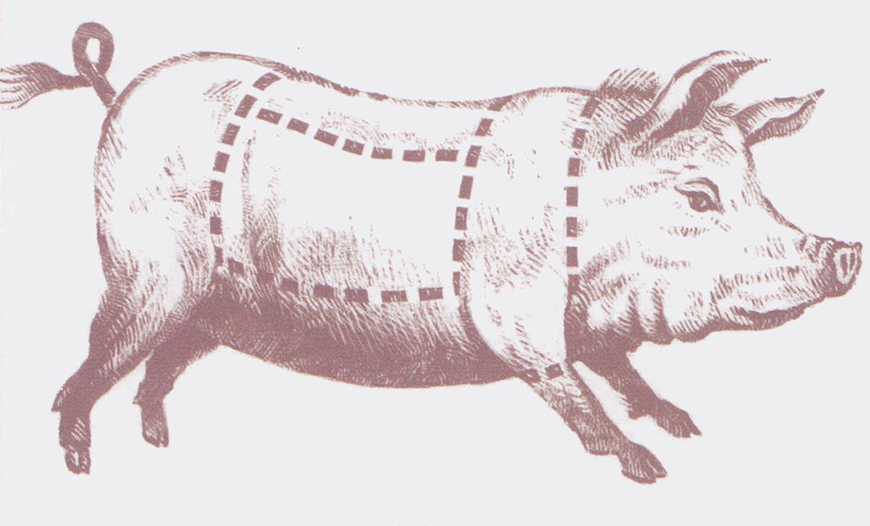