Where to stay in the Sierra de Aracena?

The "Iberian ham tour" and the "Jabugo tour"

Finca Montefrio: a farm with all organic...

The rain returns to the dehesa (oak meadow area)

We've been waiting for it for months, now it's finally here! Rain fell on the South of Spain. In this year 2017, it was not until the 17th of October that we finally saw the fields and the Andalusian dehesa take on a bit of colour. The main concern for pig farmers during the summer is not the temperature of the water and the air on the beaches of the coast, but the number of days to wait before the first drops of rain.

Dehesa and bellota in autumn

The autumn rains mean an awakening for the Andalusian lands: they bring new life to the fields and meadows. The pastures of the dehesa are tinged with green and various other colours. After several months without rain or with strange summer storms, the "campo" (the countryside) suffers; it has had to endure high temperatures during the day (sometimes 40 degrees).

The agrarian and livestock sector emphasises the beneficial effects of rain in the autumn, with a drop in temperatures that facilitates farm work. The whole "ham" sector would like to see weather conditions normalised, more rainfall recorded and more moderate rains.

The first autumn rains delight Iberian pig breeders but also mushroom pickers. The Sierra de Aracena and Picos de Aroche is a region rich in varieties (gurumelos, oyster mushrooms, porcini mushrooms...). The mushrooms there grow from one end to the other of the natural park. The rain, so long awaited in this part of Andalusia at this point of the year, refreshes the soil and promotes mushroom growth. These rains are also timely for chestnuts and olive trees in the Sierra de Aracena. They are necessary for trees and give vigour to the fruit.

The “Denominación de Origen Jabugo”, an organisation that manages the production, control and quality of Iberian deli meats in the Sierra d'Aracena and Picos de Aroche area, is starting to raise questions. Every year, the droughts seem to increase, so much so that it is not impossible that one day, in a few decades or centuries, there will be no more oaks, so no more bellota (acorn), and therefore no more Iberian bellota ham!

This year was no exception, the summer and autumn of 2017 were dramatic for the west and south of the Iberian Peninsula, a heavy human toll was taken on the area due to fires (one hundred victims in Portugal and Spain).

The oaks of the Sierra de Aracena, in addition to providing the free-range pigs with this much-loved acorn, constitute a shelter for the animals in rainy weather. In the land of the black pigs of Andalusia, summer is generally very hot, but the winter is quite cold, especially in the morning. In autumn, the rains appear after months of "calor" (heat) and drought. This year, the breeders and farmers in much of Spain (Extremadura and Salamanca have not been spared), they are fighting against drought, hoping that the authorities will find quick solutions for water supplies (mostly distributed to intensive farming, on the verge of waste). 2017 is in the black list of dry years, all too frequent in recent decades. A distinctive sign of this trend is the climate footprint on trees. Every year the interior of the tree trunks is marked by a natural circle which then makes it possible to represent its age. This is true for normal years, but this year, just like others since the early 2000's, this ring of growth is so small that it will take two years for it to allow a real count of dark circles. The lack of rain affects the cycle particular to each tree: the only resources it possesses, must be reserved for itself and not for the fruit. 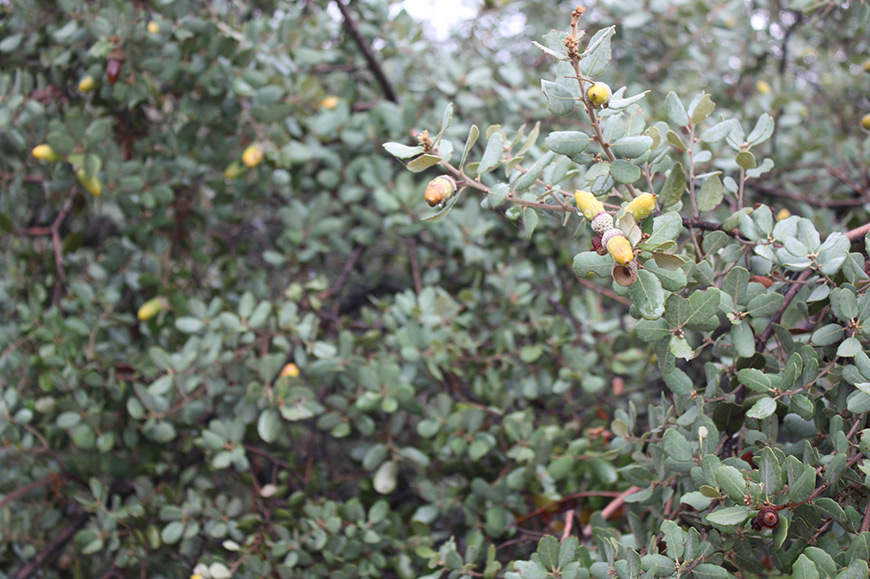 As for the question concerning acorn quantity, one of our breeders confided to us that he did not fear much for this year, because it is in spring that the quantity of water and the hydrometry determine the quantity of acorns that there will be for the "Montanera", but on the other hand he was really worried for the years to come. According to him, if the climate does not change, trees and oaks in particular will not support consecutive decades of drought, and will gradually die out. In the short term, Andalusian breeders hope for the rain necessary for the development of the acorns and grasses of the meadow. If the latter is delayed, it is then the "matanza" (slaughter) period which will be affected. Indeed, each village of the Jabugo appellation must respect a deadline, and cannot slaughter pigs outside of it. In the medium and long term, without climate change, we are moving towards a decrease in the amount of acorns, and therefore a decrease in the number of bellota hams (from 50 to 100% pure Iberian). A small reminder: an Iberian pig eats an average of 11 kilos of acorns per day during this autumnal period. This year, production is expected to remain similar to last year, with around 700,000 pigs nationally at bellota quality (from 50 to 100% pure-bred Iberian, red and black labels). For example, in the Sierra Norte de Sevilla (neighbouring province), according to José Manuel Roca of ASAJA (Asociación Agraria Jóvenes Agricultores), forecasts predict about 70,000 Iberian bellota pigs. Regarding the purity of the breed, only 40% of the Sevillian production will be pure Iberian (100% Iberian), while the remaining 60% will be Iberian crossed with the Duroc breed.

The situation seems somewhat alarming this year, by the end of November the rain was still not enough in quantity and the level of groundwater is very low. But we want to reassure our customers, there will be bellota and therefore jamón, lomito and lomo caña of high quality for a long time to come. However, in the more distant future, this is less certain. If nothing changes, it is not impossible that one day, because of the endangerment of this fantastic ecosystem, we will only have cebo ham to enjoy. 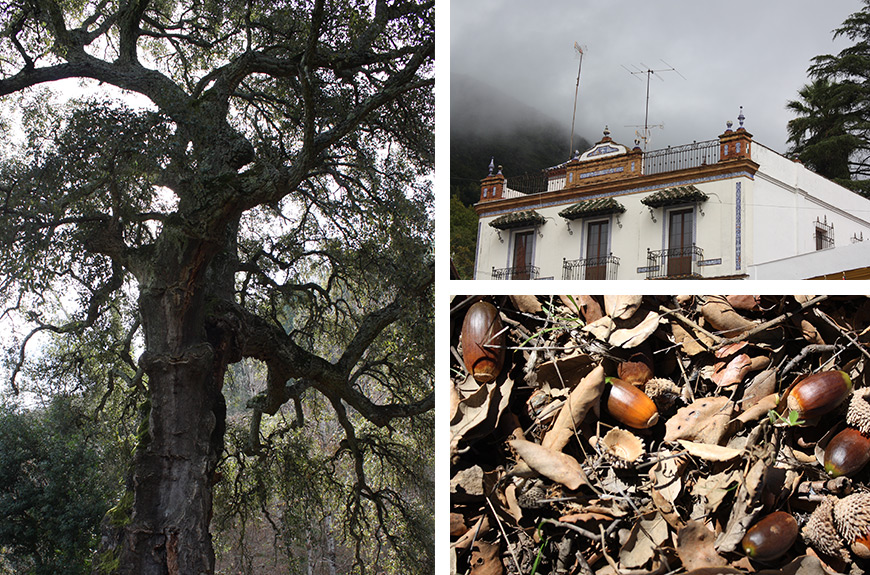