Along with flamenco, tortilla, wine and Semana Santa, ham is an institution in Spain, a delicacy that is enjoyed and shared throughout the peninsula and which makes a country famous and proud throughout the world.
In order to guide gourmets and amateurs who are a little lost in this wide choice of products, we offer you an overview of Spanish ham production. What are the different categories, how to identify and recognise them? Where is ham produced in Spain? What is a Designation of Origin and why is it a sign of quality?

In Spain, there are designations of origin for ham: 4 for Iberian ham (which we will look at in detail as they relate directly to the ham sold on this website), and 3 which regulate the production of Serrano ham (literally, mountain-cured ham).
A first distinction is made in relation to the breed of the animal: Iberian or white (pink) pig, and it is important to point out that these 7 designations represent only a tiny part of the total production. In 2020, according to figures from the Spanish Ministry of Agriculture, production was 31 million animals, while in 2019, Iberian pig farming involved 3,3 million animals, 11% of total production that year. 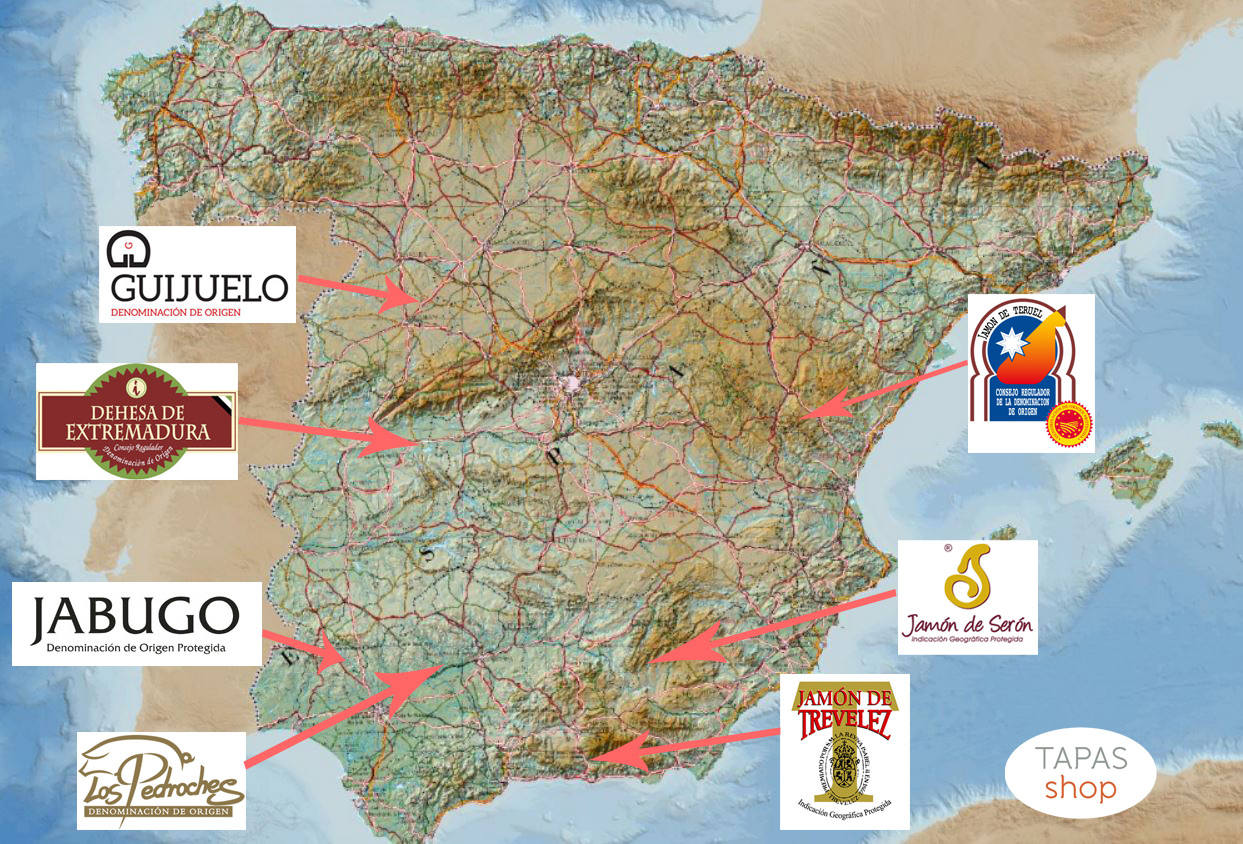 PDO and PGI for Spanish ham

The PDO and PGI are quality indicators, recognised and declared not only by the Spanish Ministry of Agriculture, but also and above all by the European Union. The PGI is a little less strict and does not require that the entire production process be linked to a geographical area. In the case of Serrano ham, it is not necessary for the pigs to be reared in the area covered by the designation. For example, the Trevélez PGI, which is located around the village of the same name (in the heart of the Alpujarra mountains in the Granada sierra) is a beautiful area, but you won't see a single pig there. It is the smell of cured ham from the drying sheds that wafts through the streets of the villages that reminds us that we are in one of the best areas for curing Serrano ham. Bayonne ham, a Protected Geographical Indication (PGI) since 1998, is based on the same principle; the authorised curing area is located in the south-west of France. 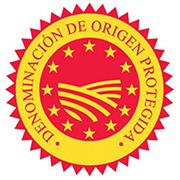 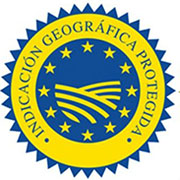 Serrano ham comes from the white pig and its diet consists of foods derived from cereals. It is the most common dish and is usually eaten in Spain for breakfast (the most typical is ham with olive oil and tomato) or in recipes as an additional ingredient, in Andalusian salmorejo for example, or as an accompaniment to an aperitif.

The main differences between Serrano and Iberian ham lie in the breed of pigs, their feed and the way they are cured and dried (up to 4 years in the case of Iberian hams). 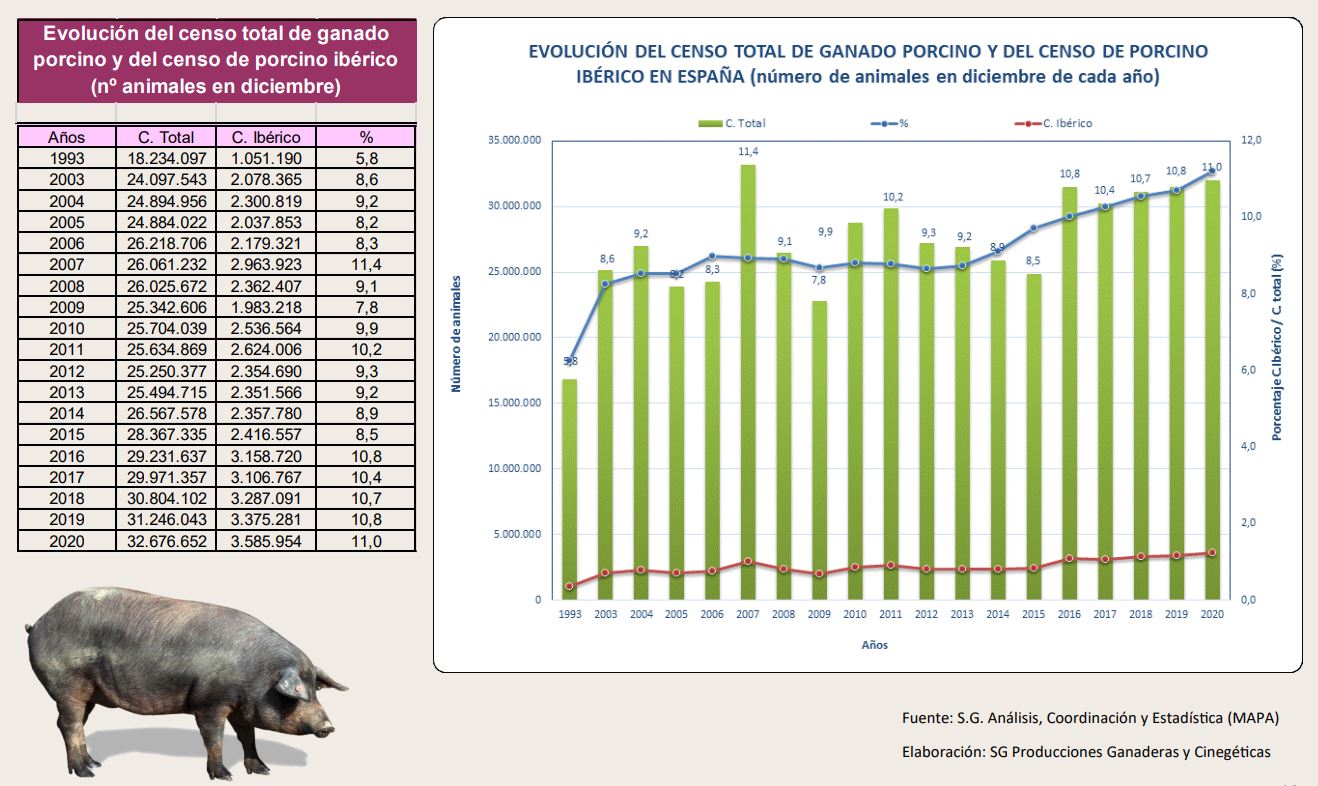 Published by the Spanish State Statistical Service, the evolution of total pigs and Iberian pigs since 1993.

The 4 designations of Iberian Ham

What does this designation of origin imply?
All the production stages of an Iberian ham must take place in a specific geographical area, which guarantees the specificity and quality of the product.
This encourages the perpetuation of a local gastronomic tradition and heritage, as well as a strong economic value.

We have already mentioned that this variety of ham only represents around 10-11% of the total produced in Spain. Its production is more complex than that of Serrano ham, and it is subject to strict set of conditions that must be met by breeders and ham producers must comply with in order to ensure that it remains the jewel in the crown of Iberian gastronomy, recognised and appreciated on all continents.

Data provided by ASICI (Interprofessional Association of the Iberian Pig) via its ITACA platform (information system) indicates that in 2020, of the approximately 3 million Iberian pigs, there were 732,962 in the top category, "Iberian pig of bellota". This category is further divided as follows:

These figures may vary from year to year depending on factors such as the quantity of acorns (drought years are less favourable), producers' stocks, and the market (it is necessary to plan 3 years in advance, the time it takes for the ham to dry). 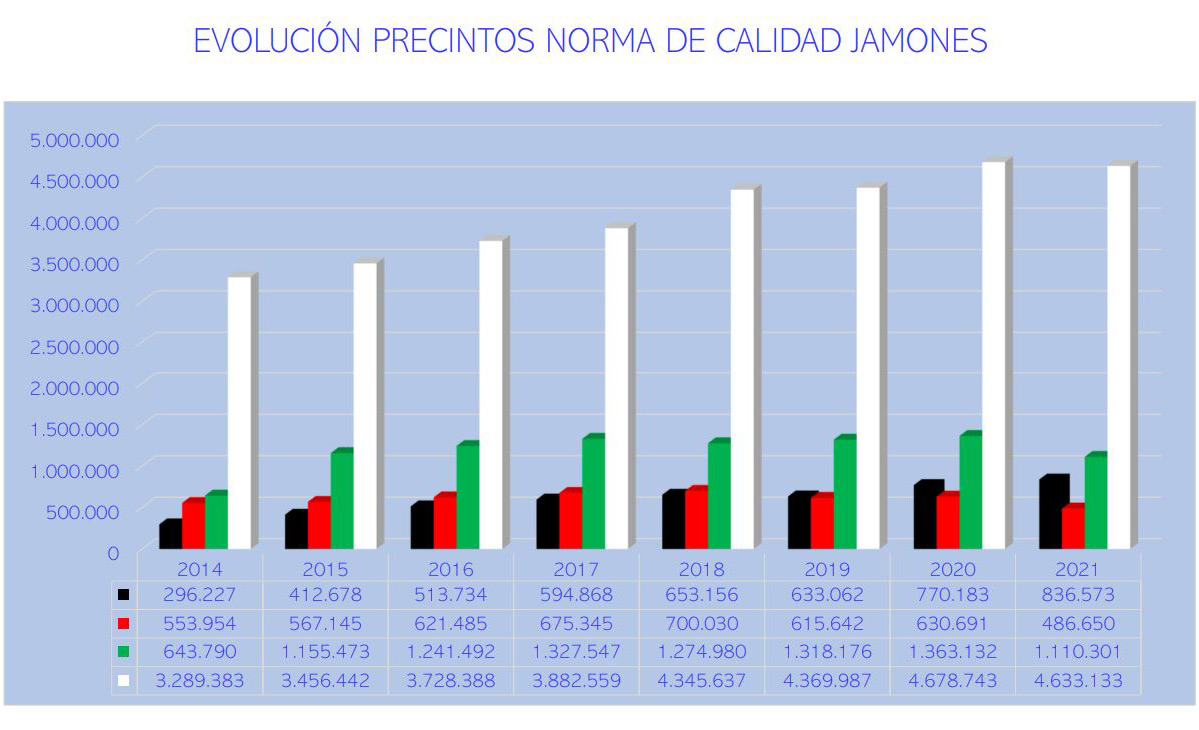 The geographical distribution of farms on the Iberian Peninsula in 2020 is as follows:

In 2018, almost 7 million hams are marked with the Iberian quality label (with the Iberian quality label). However, after five years of continuous production increases, the Iberian pig industrial sector recorded a decrease in 2019. According to the interprofessional association ASICI, the slaughter of Iberian pigs fell in 2019 by 1.6%.
However, during the montanera of 2019-2020, the number of sacrifices of Iberian pigs of bellota (those fed on acorns from the dehesa) increased by 9.5% and reached 732,962. Finally, the 4 labelled colours accounted for 6.9 million Iberian hams.

Below, for the 4 Iberian ham designations, geographical and climatic indications are provided in order to differentiate them, from their environment to your plate.

How much is an Iberian ham?

The price of a 100% Iberian bellota ham is around 300 - 500 € depending on its weight and the stockbreaders or ham producers that sells it.

Prices also depend on the category, the cheapest being the white-label cebo ham (the most common). This is a far cry from the price of a Serrano ham, which is available for less than €100.

At that time, the designation named Jamón de Huelva was recognised by the Spanish government. In 2017, it was renamed DOP Jabugo.
The land where the pigs of this designation are reared includes the oak meadows of the Extremadura provinces of Cáceres and Badajoz, as well as the Andalusian provinces of Seville, Córdoba, Huelva, Cádiz and Málaga.
From the slaughtering, to the cutting up, salting, drying and curing in natural cellars of the products from these Iberian pigs, all these stages take place in one of the 31 municipalities of the sierra of the province of Huelva.

The proximity of the Atlantic Ocean is important: humid and temperate winds from the west will mark the thermal regime as well as the rainfall of the area. The rainfall regime in the region is relatively high, with a maximum in winter. Rainfall is almost equal in autumn and spring. Summer is marked by an almost total drought during the months of July and August.

Average temperature 14'8°C for Aracena
Warmest month: July with an average temperature of 25°C in Aracena during this month / Coldest month: January 6.2°C on average in Aracena.
The microclimate of the designation's curing area is one of the reasons for its uniqueness: the natural drying of the hams (they "sweat" a lot in summer) is favoured by this temperature alternation.

In 2020, there were 39 companies registered with the Regulatory Council (Consejo Regulador). This is far from representing the entire production of the Aracena sierra. 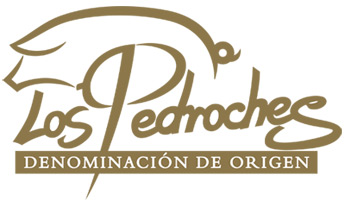 The most recent of the 4 designations.
The pigs are born, reared and fed in the same area where the Iberian paletas and hams of this designation of Los Pedroches are made and cured. The geographical area covers some thirty municipalities in the province of Córdoba, all of them to the north of the city of the same name (Pozoblanco, Hinojosa del Duque, Villanueva de Córdoba...).

Cold and dry Mediterranean climate with continental features.
There are two very marked periods: winter is cold with moderate rainfall and summer is dry and hot. Autumn is relatively mild and spring is almost unnoticeable.
Long dry spells during the summer period are very common.
Rainfall is irregular throughout the year (around 500 mm on average).

The dehesa (holm oak pasture) in the north of the province of Córdoba represents 300 000 ha. It is home to cork oaks and Portuguese oaks of Quercus family. It is the encina species of oak that is most present. In fact, the northern part of the province of Cordoba has the highest percentage of encinas in the whole of the Iberian Peninsula.
In 2020, there were 151 pig farms and about 15 companies registered with the Regulatory Council (Consejo Regulador).

All the production stages: breeding, slaughtering of Iberian pigs, curing, maturing and drying processes must take place in the same area, i.e. the entire territory of the autonomous community of Extremadura, which is made up of the provinces of Cáceres and Badajoz.

The dehesas are mainly populated by holm oaks and cork oaks, and are widespread in the autonomous community of Extremadura (formed by the provinces of Cáceres and Badajoz). With almost a million hectares of dehesa the pigs have plenty of space to stretch their legs. It is the largest region in terms of livestock production.
In 2020, there were 2100 "cebo" pig (animals that only eat cereals and are not free-range) farms for 120 pork butchery companies.
(Source : Mercasa, ALIMENTACIÓN EN ESPAÑA - 23ª EDICIÓN. 2020/2021)

The pigs used to make the products of this protected designation are distributed in the west and southwest of Spain: in Castilla y León, Castilla-La Mancha, Extremadura and Andalusia.
The pieces spend the maturing and drying period in an enclave between the Bejar and Francia mountain ranges, located in the south-east of the province of Salamanca. This is the only designation of origin where the area where the pigs are reared is different from the area where the Iberian products made from them are produced.

With a continental climate, the winters in the south-east of the province of Salamanca are long and cold, with an extended period of frost (more than 1000 metres above sea level). This dry cold gives the ham of this designation a milder flavour that differentiates it from other hams.
The summers are dry, hot and with strong temperature fluctuations.
In 2020, there were 346 companies registered with the Regulatory Council (Consejo Regulador) for 872 livestock farms. 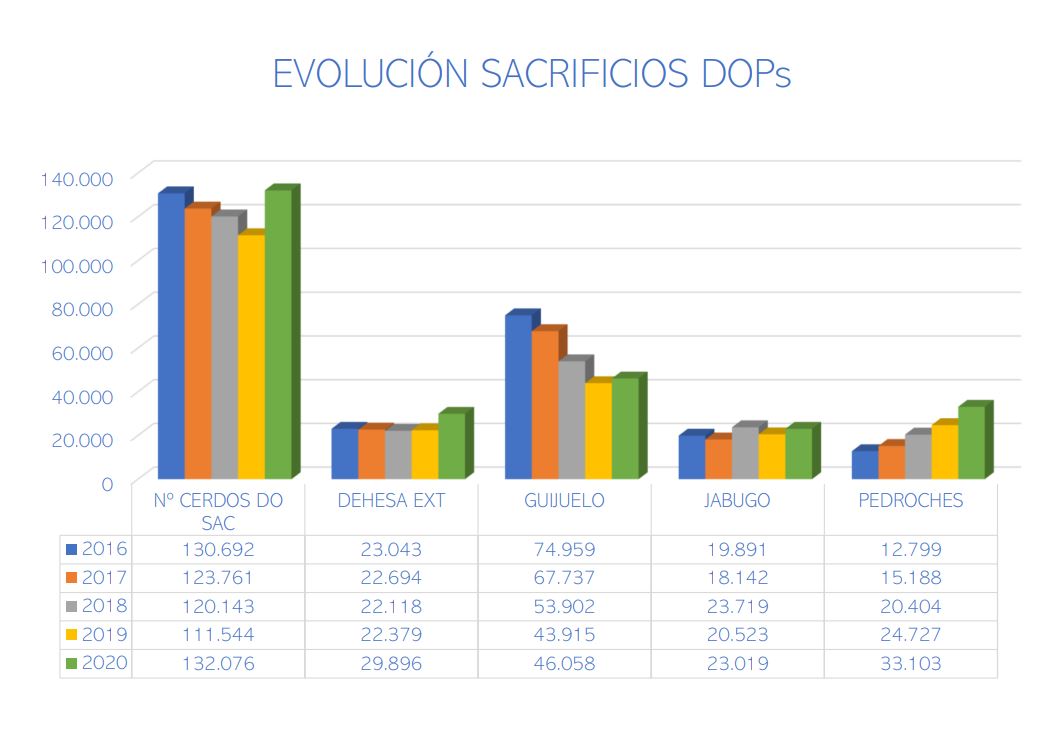 Asici data on the evolution of the number of pigs per Designation of Origin between 2016 and 2021.

To conclude, let's start with this reference published in the Spanish Official State Bulletin in 2014. The following graph shows the amount of pigs allowed per hectare, depending on the coverage of oak trees, to obtain the designation "de bellota". For example, below 35 trees per hectare there can only be one Iberian pig. 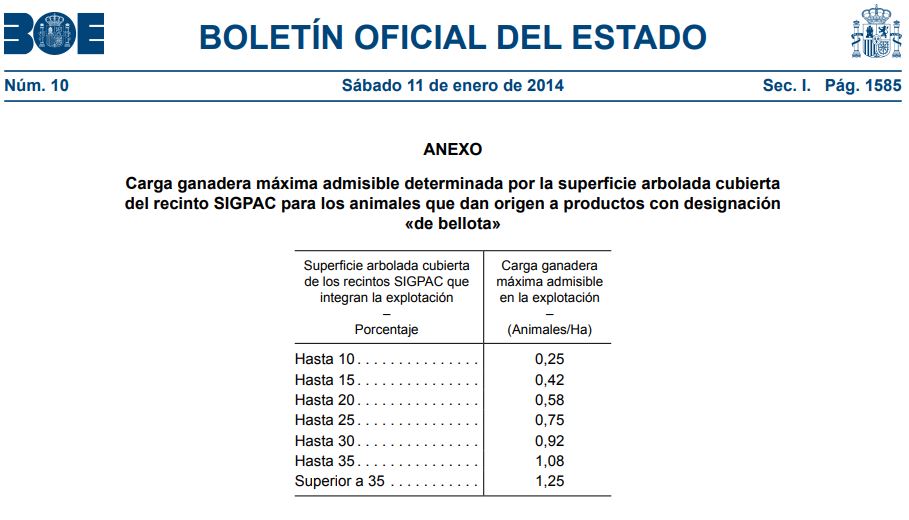 This graph shows how essential ham is to the Spanish economy and culture. From breeding to curing, cutting and tasting, it is an art that is applied in a sector that has always been dependent on rain and shine. At national level, an association of experts maintains this culture and this unique know-how: AGACUJ
With 31 million pigs in 2020, Spain remains one of the European leaders, but as we have just seen, not all hams from this production are on the same level. At the end of the funnel, only a minority are labelled (PGI or PDO), and it is towards these quality labels that we advise you to turn.

Since 2019 and the Covid pandemic19 it is more complicated to make predictions about the ham market. For example for Iberian ham: between the moment the acorn falls off and the moment a slice of ham is put in the mouth about 4 years ago. How can we predict the consumption of a fairly expensive product several years in advance? In 2022, after several years of growth, there will be a significant drop in production, with the immediate effect of an increase in meat prices (the price of our famous presa ibérica has risen sharply).