Olivae: the tree and its fruit

The olive tree is a tree classified in the Oleaceae family. The olea variety to which it belongs comprises about thirty different species in the world. In the Mediterranean, the cultivated species is oleastre, which encompasses many varieties that produce olives of various forms and tastes, and comes from the Oleaster, called wild olive (acebuche in Spanish).

A characteristic tree in the Mediterranean landscape, the olive tree olea europaea is the only species of the family Oleaceae whose fruits are edible.
Its green fruit turns to brown or black tones when maturing. The oily fraction is extracted from the mature fruit.
Along with the green oak (quercus ilex) the olive tree is one of the most typical plants of Mediterranean vegetation. It particularly likes calcareous soils. Sensitive to the cold (except during the vegetative rest period), the olive tree withstands high temperatures if the water supply is satisfactory.
The foliage of the olive tree is persistent. It is an evergreen tree that renews about one third of its leaves every year (leaves with a life cycle of 3 years). Depending on the variety, there are large foliage variations, but the leaves, which are 3-8 cm long, are usually dark green (or other shades of grey-green, etc.) with, above and below, a lighter green, silvery, almost white. In the event of a storm, the leaves turn to expose their under-side to the rain in order to capture water, the other side being used for photosynthesis.
In herbal medicine, multiple beneficial properties (anti-bacterial, anti-viral, etc.) are attributed to the leaves. In his Natural History , Pliny the Elder, evoked the healing virtues of olive leaves.
A tree with tortuous trunk, it is distinguished by its very long life. Its growth cycle is divided into four stages:

On French territory, the oldest of the olive trees is found in Roquebrune-Cap-Martin in the Alpes-Maritimes department. Planted above a low wall, the roots of this remarkable millenary tree gradually absorb each stone. Among the olive trees considered to be the oldest in the world, the olive tree from Vouves in Crete stands out, whoseage is estimated at 3,000 years or even more. It disputes the title with "Al-Badawi", an olive tree from a small village near Bethlehem. 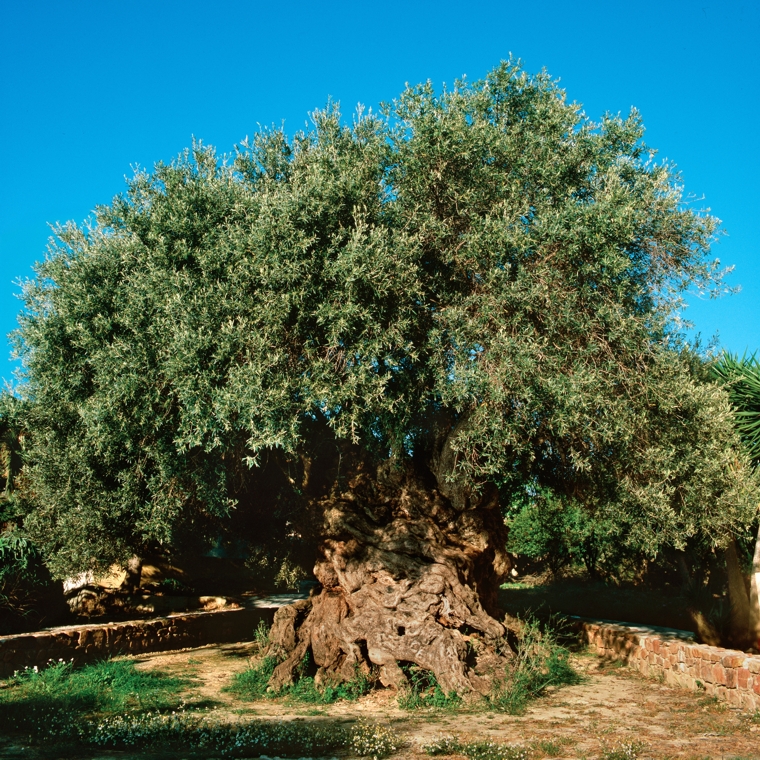 One of the oldest olive trees in the world, the olive tree of Vouves in Greece. Photo Michalis Polychronaki Olive Tree Museum of Vouves

Each year, trees are subject to the following timeline:

Different diseases or invasions of insect can affect the tree. The olive fly, for example, lays eggs in the olive, then its larvae develop there, and make the fruit fall prematurely.
The olive tree is also prey of a bacterium called Xylella fastidiosa. It was discovered in Europe in 2013; first in southern Italy and then in France (in 2015), and the following year in Spain. There is no known treatment to date (2019) to stop its effect. The only way to limit the damage caused by this bacteria, once the infection is detected, is to remove the trees in the surrounding area to isolate the affected trees.

The fruit of the olive tree

The majority of olive trees are self-fertilising, whereby their pollen is used to fertilise their own ovaries. Fertilisation is mainly done by way of the wind, and lasts for about one week a year. Only 10% of the flowers produce olives. The fruit of the olive tree consists of three parts: the stone, the flesh or pulp, and the skin, the cuticle. It can be used for oil production or as table olives.
After pressing the fruit, an olive oil is obtained which is immediately consumable. Conversely, the table olive (or eating olives) must be prepared, and undergoes certain operations for it to lose its bitterness, and to make it edible.
In order to collect the juice of the olive fruit, one must:

There are two main methods of extraction: pressure and decantation. The first, the oldest, is to spread the pulp on discs called scourtins that will retain the solid part (stone and pulp of the olive) while allowing the liquid part to filter. 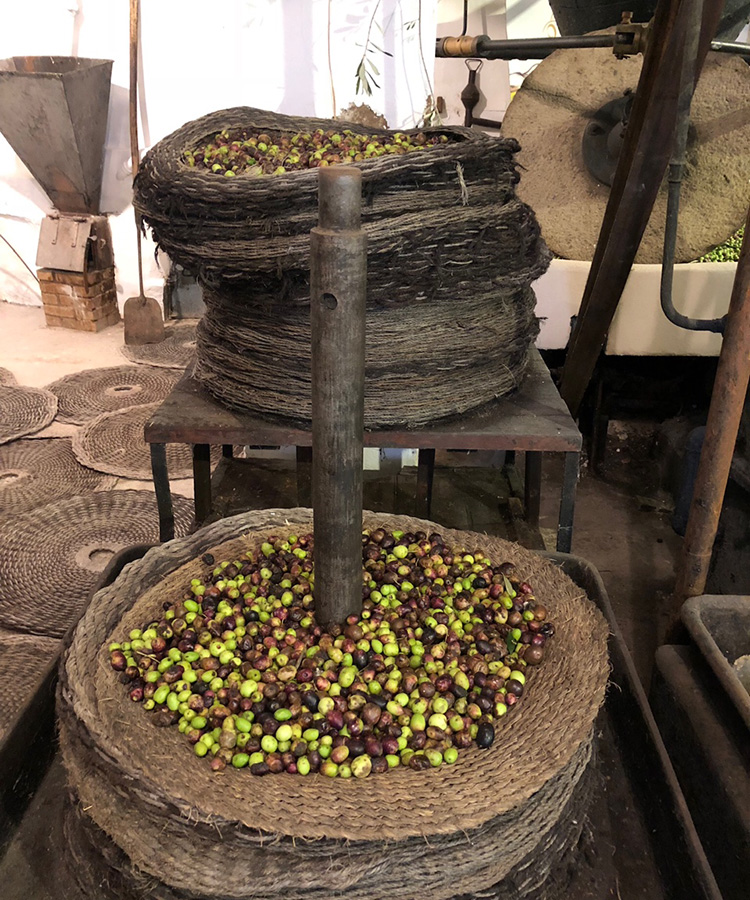 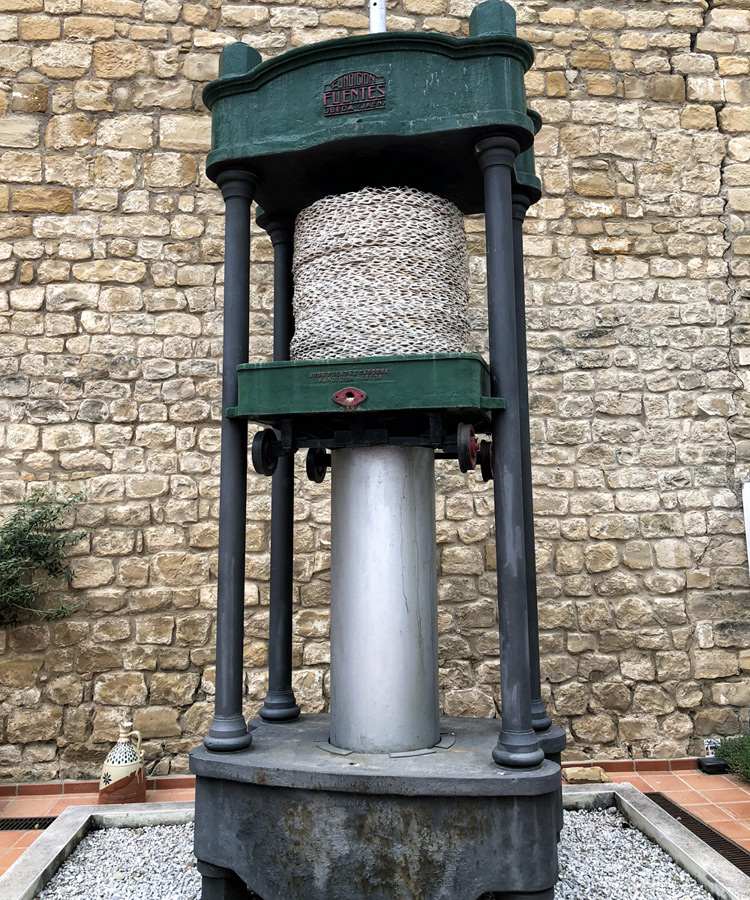 Press with Scourtins at "Centro de Interpretación Olivar y Aceite" in Ubeda
For the more modern decantation, a cylinder rotating at high speed will separate the different components of the pulp according to their density.
The oil is finally stored in tanks to prevent oxidation.

When are the olives harvested?

The olive will go through several stages of coloration (or directly from green to black for some varieties). The colour of the olive depends on the moment it is picked. The olive is vgreen if it is harvested before maturity. It is purplish or "turning" if it is harvested at maturity (this stage of colour change from green to purple is called veraison and happens around September). It is black in colour if harvested after maturity.

The fruitiness of olives

Depending on the harvest period and the degree of maturity of the fruit, three categories of taste can be distinguished, which correspond to the fruitiness of the olive:

Culinary use according to the fruitiness

The type of fruitiness can justify the use of olive oil rather than another in cooking: a green fruit oil can accompany raw vegetables or crustaceans for example, while a ripe fruit would be suitable for fish or with pastry. Lastly, you can reserve the black fruity for spicy dishes or game.
In restaurants, cooks make many dishes for which olive oil has an important role; great chefs use this or that AOVE olive oil according to their taste, their feel, their attachment to a terroir, etc. One of the latest surprises we have tasted is an olive oil sorbet, with a very intense taste!

Millennium tree and symbol of the Mediterranean, the olive tree has been related to human activity since ancient times. On average, an olive tree produces 15 to 50 kilos of fruit (depending on variety, age, etc.), and a litre of olive oil is obtained from 5-6 kilos of olives. In the 1960s, Spain was already producing 350 to 400 tonnes, a quantity that was largely exceeded in a few decades, and the forecast for 2019 is 1.5 million tonnes.